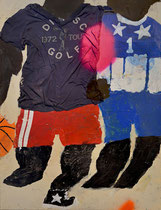 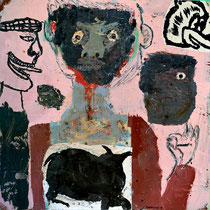 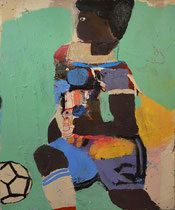 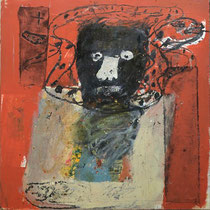 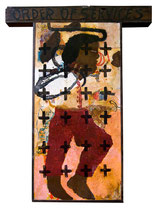 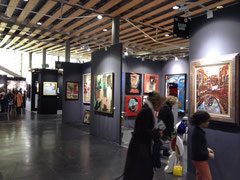 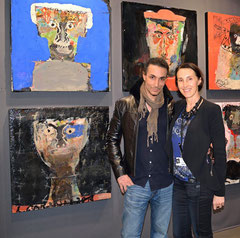 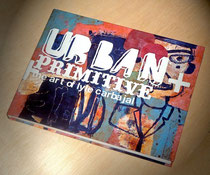 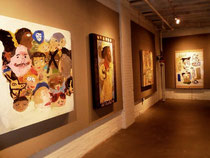 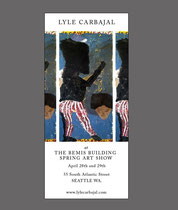 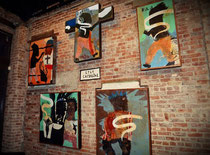 • 2012 Exhibited at The Affordable Art Fair in Los Angeles

• 2011 Work shown on the HGTV program: “Interiors Inc.” in conjunction with Pierce and Co

• 2011 One Man Show “Art For My People” + book release (Urban+Primitive: The Art of Lyle Carbajal)

Artist Lyle Carbajal moves around a lot, and was actually en route during this interview, headed to his native L.A. via Portland with plans for Spain and France in the near future. Excited about showing his works in the upcoming CARTWHEEL Street & Outsider Art Pop-Up Show, we asked him about travel, music, and painting.

Can you tell us more about your Untitled piece that we will be showing at the CARTWHEEL show?

Untitled was originally conceived over a period of time when I became very interested in religious iconography, including aniconism. This idea over time would go on to make up parts of my visual language; which I suppose continues to expand–although not exclusively in this direction. Accompanying the cross is the idea that all knowledge is bestowed within an icon. This knowledge is locked and encrypted so as to guard a secret. Similar to many religious paintings, often my paintings are filled with knowledge and literal meaning. However, the intent or message that each image carries is meant to lurk or suggest, rather than teach or dictate.

Everything I do by way of painting involves delineating between its “correct” or highest form and that of its most primitive state.  The subject of my recent pictures is much about the way common people draw everyday objects or rather the way things are drawn when the application is neither fine nor illustrative but when imagery is conceived through its function.

Can you tell us more about other current projects you’re working on?

Along with these recent works and new representation abroad, I recently began pouring myself into both the production of a full-length documentary and a follow-up to Urban+Primitive: The Art of Lyle Carbajal.

A couple of questions about traveling:  I understand that you are in Portland now, and in 2013 will be living in France and Barcelona, and that traveling is a big part of your existence. How does changing locations inform your work?

Yes, and by the time you read this I’ll be living in Los Angeles.

I hate vacationing, opting rather to fully immerse myself into a culture.  After all it’s a city’s zeitgeist that interests me: the sights and sounds, the way its inhabitants either cherish or disregard artistic forms, the city’s visual connection to the past and whether or not it recognizes the indigenous culture.

What’s the art studio like of an artist who is always on the move?

As a traveler, are you a collector or a minimalist?

Very much a minimalist, although I do collect reference material.

What are the cultures that most inspire you, and why?

I am inspired enormously by traditional and contemporary Mexican and Argentinean culture. I have also spent a lot of time looking at the art of Ghana and Haiti and also living in the Southern United States; which left a remarkable influence in the way I look and value art. I love the French culture and their appreciation of primitive forms and then of course, California’s take on contemporary and popular art.

What kind of music influences you?

What influences me and my work is probably different than what I would jam to when I’m making noodles.  I love the Stones and the Nashville sound, folk singer/song writers, Seattle grunge, and hard rock.  What has dramatically inspired my work in the past specifically are pieces by Donald Byrd, anything by Donizetti, Lhasa, and Carlos Gardel but most importantly, traditional and regional Mexican folk music, Argentinean Tango, and Ethiopian Music.

More questions about your process and work:  I read this in one of your interviews and wonder if you could explain it more: ‘If one looks closely at my pictures and understands paint, they will find how passionate I am about letting paint simply be paint.’

This is a long discussion and so I will instead offer only this short anecdote: You’re sitting at Swingers on Beverly with a buddy visiting from Portland and you ask him to draw you a toaster.  Yup, just a regular ol’ Black and Decker.  Maybe the conversation over lunch was about the recent purchase that’s browning your toast in the morning.  Anyhow, using the No.2 pencil left behind by the waitress he quickly jots one down on the napkin. Okay, so here’s the part I’m getting at: Do you think that at any time your friend thought about/cared/or felt self conscious about the fact that only the No.2 was available rather than the No.1?

How do graphics and comics enter your work?

I worked as a professional graphic designer and illustrator back in the 90s when I first got out of school — diggin’ anything by Don Martin, George Trosley, Pete Miller and Jack Kirby. Today, I illustrate, much like in comic form, the entire bottom layer of all of my paintings. They’re there to offer warmth, history and a sense of humor to my pictures. It adds a keen sense of composition, to which I owe to a formal education in the Graphic Arts.

You grew up in Los Angeles? What are some of your favorite things about L.A.?

Born and raised until my family moved away sometime in my early teens. I love the abundance of talent and creativity in L.A. and being able to order almost anything off a menu and have it made exactly the way you want.

Top image courtesy of the artist