Jacques Mahé de La Villeglé, or simply Jacques Villeglé, was born in Quimper in 1926. He studied sculpture at the School of Fine Arts in Rennes, where he met Raymond Hains, in whose footsteps he ended up following. From 1947 to 1749, he studied architecture in Nantes, then, he settled in Paris. He began by collecting objects on the beaches of Saint-Malo (steel wires, rubbish and remains from the Atlantic,..) objects with which he creates sculptures, then from 1949 he begins to collect torn posters; he calls himself an “affichiste” and proclaims to be a “guerilla des signes” (a guerilla of graphic arts).

At the start of the 50s, the young man hung around with the dissident “lettristes” (A French avant-garde movement, which included artists such as Bull Dog Brau, Guy Debord and Gil Wolman). Villeglé met the lettriste poet François Dufrêne in 1954. In 1958, he reaches the apogee of his movement; the torn posters are to be shown under the name of “Des Réalités collectives” ( Social Realities), and pre-empted the manifesto of the New Realism movement. In 1960, after their joint participation at the Biennale in Paris, Jacques Villeglé becomes one of the founding members along with Martial Raysse, Yves Klein, Arman,Tinguely, Hains, Dufrêne, Spoerri; this movement determines  “A fresh perspective of  perceiving reality.” For Villeglé, this movement is anchored not on the use of technique but on the reality of what is found in the streets. He tore down posters shredded by time and anonymous hands, to perceive the section which is in itself a piece of natural art. Thus, he changes their status. From 1969, he continues on this tract, with socio-political cryptograms and graffiti from which he creates an alphabet and texts.

The artist lives and works in Paris and in Saint-Malo. 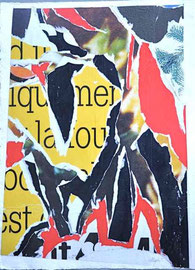 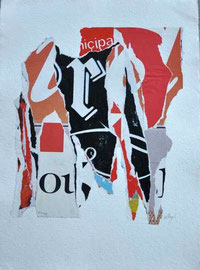 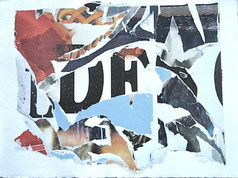 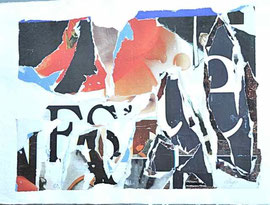