Serge Mendjisky was born in 1929 in Paris. His father, Maurice Mendjisky, was a painter from the School of Paris, this is how Serge became acquainted with the world of arts since childhood. After completing his studies at the School of Fine Arts of Paris, he soon became a recognized artist and his work was exposed in Europe, Japan and the United States. He used photography to make his preliminary studies in painting.

By decomposing and recomposing the horizons of some of the most famous cities of the world like New York and Paris, Serge Mendjisky creates new urban landscapes which put into question our perceptive faculties.

For 40 years he devoted himself to Divionism Art (also known as Chromoluminarism- a characteristic style in Neo-Impressionist painting), which he himself helped to evolve with his inspirations.

In 2000, he became interested in photography and gave it a pictoral dimention applied to Divisionist canons.

Using hundreds of his clichés, which he has worked upon, cut up and subsequently stuck to canvas, he reorganises space and time in urban landscapes which he particularly loves.

“Serge Mendjisky uses techniques of deconstruction and perspective nourished by his cubist vision of his environment.” Patricia Mendjisky 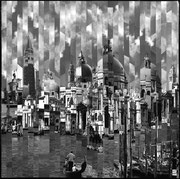